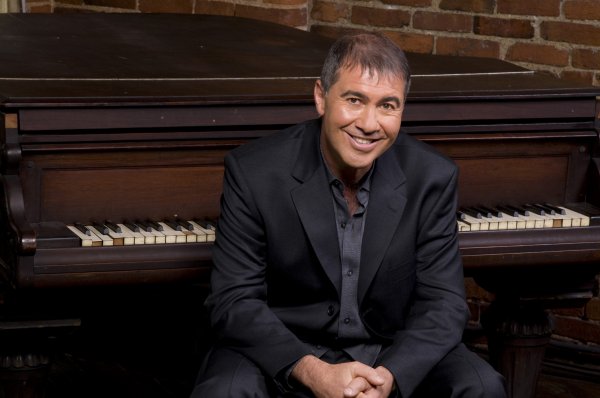 Jimmy White is a five time New Music Award Winner (Hollywood, CA) including 2012 Best Male Artist, winning over fellow nominees Steven Tyler and Michael Buble. He has also won 10 IMN Independent Music Awards (Los Angeles, CA) since 2009, including the Best Male Artist award for an unprecedented 4 years in a row.
A self taught pianist, inspired early on by the harmonies and distinctive sound of the cutting edge music of Brian Wilson, White knew from his very first spin of “God Only Knows” that he was at last “Home” ... The distinctive fusion of music and lyrics and their development in the recording process continue to be this talented singer and songwriter’s first love.

White grew up in Totowa, NJ and was composing music and lyrics in his head from his earliest memory. White’s career as a professional songwriter began while studying at Seton Hall University, when he had the first song he’d ever written published by MCA Music in New York City when he was only nineteen.

White recorded his latest CD, “My Mom Joined The Circus”, with legendary producer, Gary Mallaber, famous for his work with Van Morrison, Steve Miller, Bruce Springsteen and many others. In addition, Jimmy had a number 1 AC hit in 2010 with his “Just What I Need”, a duet with the legendary Jonell Mosser and recently completed 5 songs with the Kenny Rogers Band. White also worked for years with the late Hall of Fame producer Dave Bellanca and the late guitarist Danny Gatton, considered by many to be the greatest rock guitarist of all time. One of his long time guitarists, Kenny Hawkins (Rick James, Stephanie Mills), was a featured guitarist on “Guitar Hero”.

September 2011 marked the release of White's epic album, "Two Cities", a double CD of 26 songs recorded in Nashville, TN and Buffalo, NY. "Two Cities" is the masterpiece of White's 30 plus year music career and contains six of his AC #1 singles. Hard Rock Café reviewer John Shelton Ivany called Two Cities a “masterpiece” and “one of the best albums of 2011”. Of Jimmy’s singing, Ivany said “ Two Cities, a double album by multi-award winning Jimmy White, is a remarkable creation by a man with a pure voice. White is not a shouter, not a screamer, but a complete crooner within himself.”

Two of the videos from White’s “Two Cities” release, Katy Did and Forever and a Day, have achieved over 575,000 views apiece. “Good Friends Are Hard To Find”, from his Hidden Pictures CD, has garnered over 2,000,000 video views worldwide and has been a staple of support for the Bella Moss Foundation, which studies the devastating effects of MRSA infections in animals.

The single release of “Forever and a Day” spent 3 weeks tied with superstar Steven Tyler as the “Most Added” record in the country on FMQB AC. And “Katy Did”, after becoming White’s 4th national AC No.1, has become a karaoke classic.

White’s newest release, “My Mom Joined the Circus”. White shows an amazingly broad spectrum of musical tastes on this new 11 track CD: The tropical feel of "Michaela" and the Country flavored, "Two Beers Better" feel more commercial, while "Miserable Man" and "No Goodbyes" are very personal to the artist. On this CD, White also took a comedic look at life with the title track, “My Mom Joined the Circus” and “Daddy Looked Good”.

When asked about the eye catching title track, White offered, “There isn't a story behind the title; it was a song that just came to me, as if from another place. It took on a life of its own and ended up being a song about a young man who ends up becoming inspired by his mother, a woman who began her life again, just when she seemed a little too old to do so. I have always greatly admired my own mom, and maybe somehow, it came from there.”

When asked to describe the feeling of his new CD, White said, “This CD is softer than my previous albums, very melodic, containing songs that are pure pop, others that are the most inspirational of my career, and others that are just plain funny, which is a big part of who I am as a person. “

“Circus is a culmination, of sorts, of the phase of my career where I had finally achieved the commercial and artistic success that I had always longed for. Circus is just me being me, laughing, crying, and always doing the very best I can.”

There are two musicians/groups playing on the record that are in the Rock Hall of Fame, Gary Mallaber (Steve Miller, Van Morrison, Bruce Springsteen among many others) and the members of the Kenny Rogers Band.

My Mom Joined the Circus is released on 828 Records and the full CD, singles and ringtones are now available on iTunes: and Amazon.

New for 2015 - White’s first national No. 1 record, “Change My Life”, has recently been included in the soundtrack for the Canadian independent film release, “Aurelie Laflamme”, which was released to a worldwide audience on April 24, 2015

This multi-award winning artist says modestly of his gifts: “I just do the best with what God gave me”. 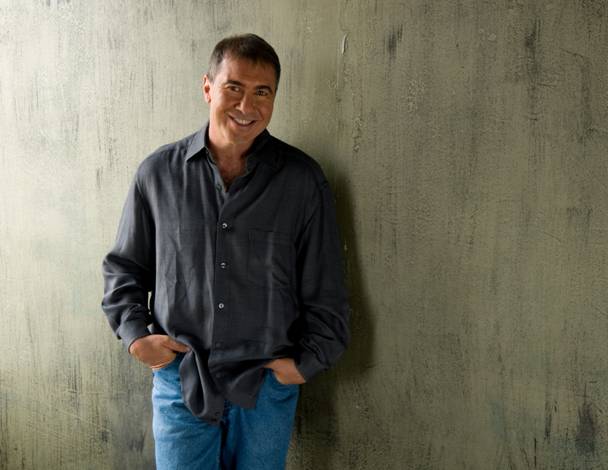 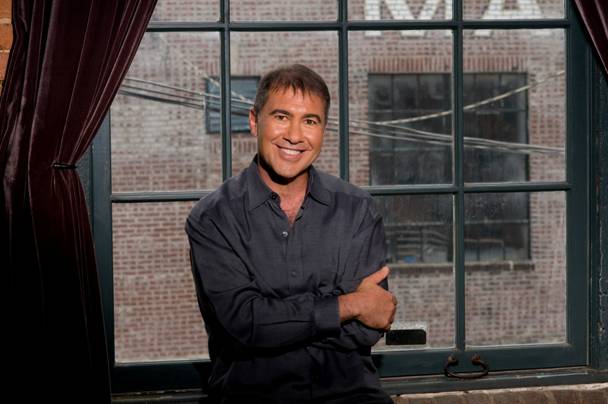 A wonderful interview with Jimmy in the “Award Season 2011 Special Issue” newsletter from Independent Music Network. Jimmy was nominated in 4 categories and WON the Best Male Artist Award for the 2010 IMN Awards.

A great interview with Jimmy in the “Best of 2010” newsletter from Independent Music Network. Jimmy has been nominated in 4 categories for the 2010 IMN Awards.

A great interview with Jimmy in the “Summer” newsletter from Independent Music Network.

A great interview with Jimmy in the “March” newsletter from Independent
Music Network after Jimmy had recently won the IMN “Best Male Artist of the Year” for 2009. 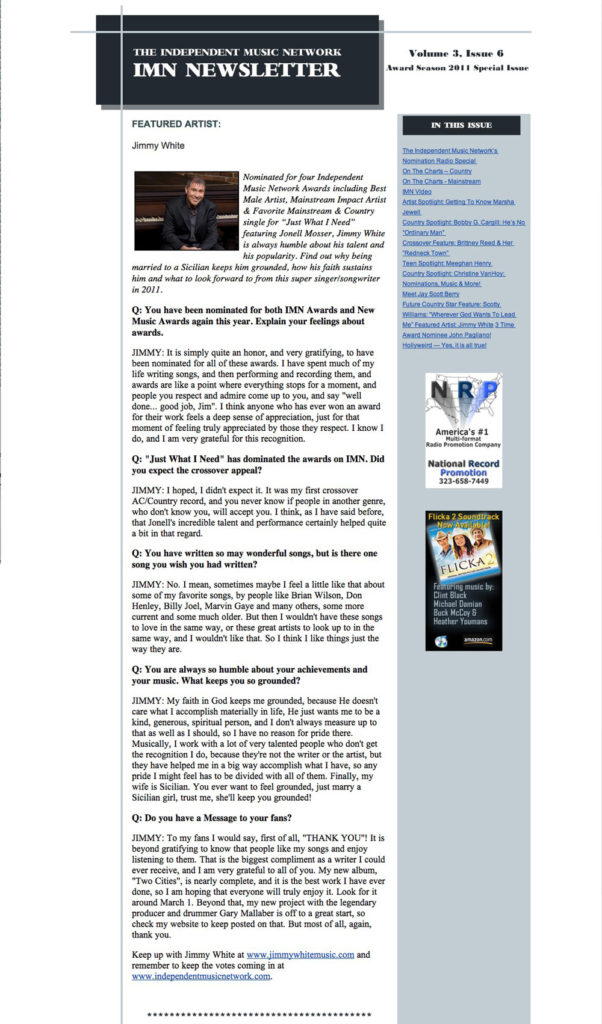 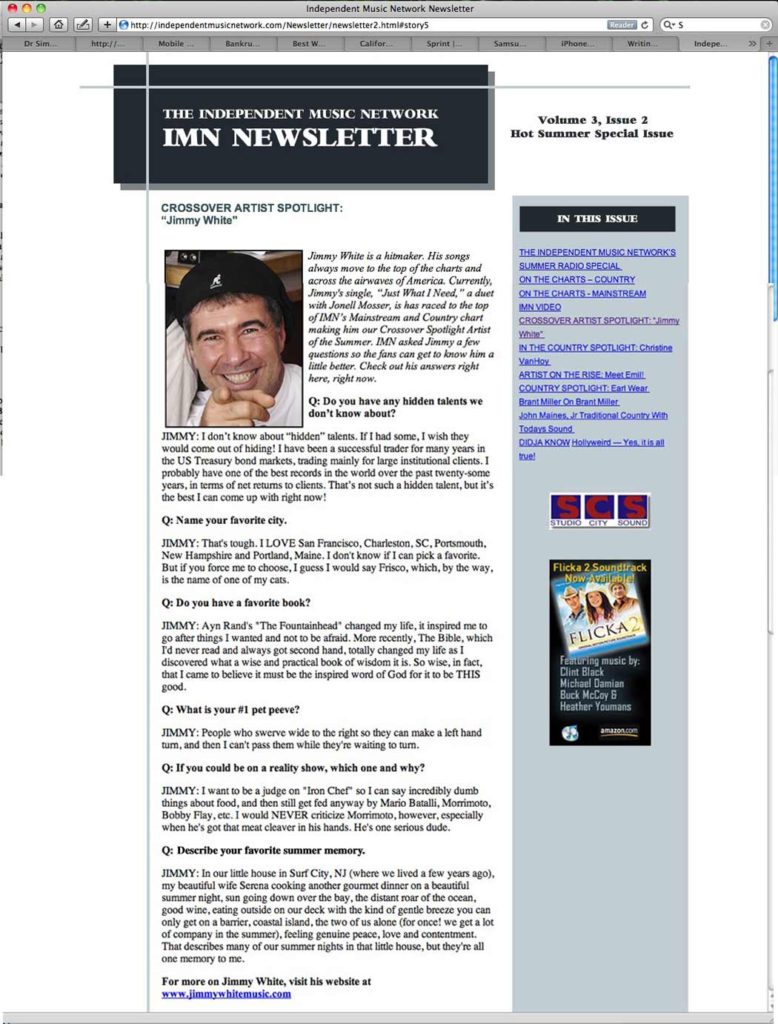 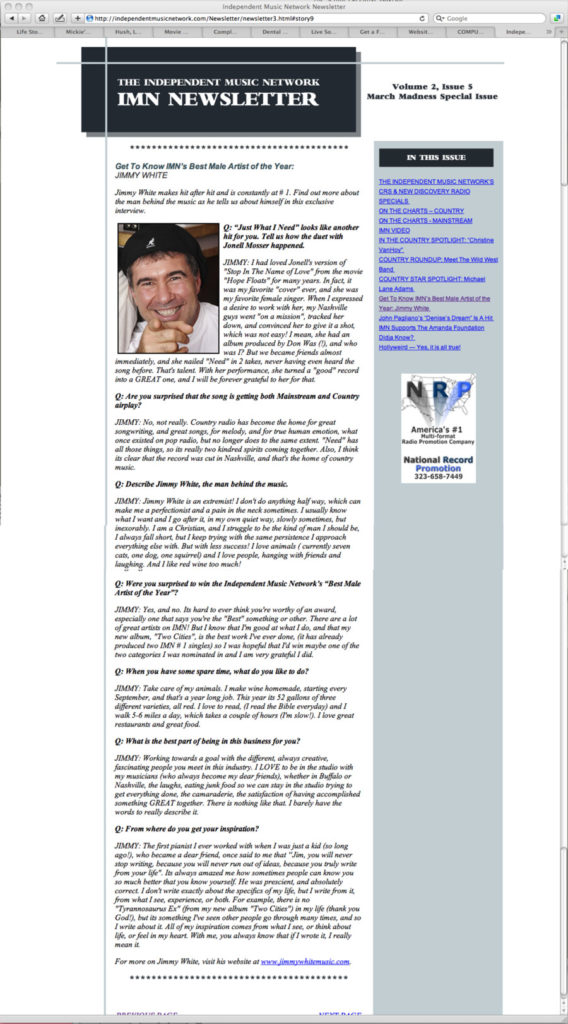